Over the years drivers have now become more concerned with the world that they live in, as they realized that what we were doing with our planet would not affect us but our future generation. We have been polluting because of what is offered to us at the time. One of the worst offenders is the car, but as the gasoline engine was the standard fuel source what choice did we have? However we now have a choice and these upcoming 2012 electric cars that will be in direct competition with the Nissan leaf is proof of that.

A few years ago the thought of an EV as they are now known was considered a future car or concept. There were one or two available, but not production models or those with a practical use. Having said that, the likes of the Nissan Leaf is only practical in certain circumstances, such as those who wish to commute to and from work or only have to do local driving.

The electric vehicle is still has a way to go if they have any hope of replacing the gasoline-powered engine, but we all have to start somewhere. We know that what we have as an alternative is a start and a good start at that, but what do we have for the future; here we will look at a few models that are coming in 2012 and 2013.

The model that we are most excited about is the 2012 Audi e-tron, and is an EV with a difference, as it is not afraid to go bold with the design. Like the R8, this Audi will not be cheap, but let’s face it you are not talking about your average electric vehicle here. The technology that the German automaker will use is not only going to be state-of-the-art, but also super green as well.

We expect Europe to see the car in late 2012 and early 2013 in the US. There is one issue that we do have though; we cannot expect it to have the same design as the one that we see below. 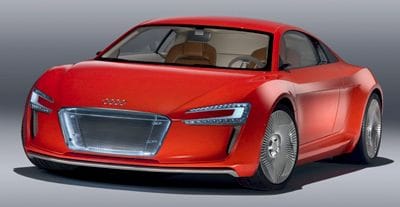 The Chevy Volt is not what you would call a fully-fledged EV, but it still has a lot of the same technology. The 2012 Chevrolet Volt MPV5 will be a different version of GM’s popular sedan, but will be one that driver’s want. Currently most EVs coming to market are either sedans or hatchbacks, so is a welcome change to have something a little different.

Now although we said that the technology is improving to make the electric vehicle more practical we do love the fact that having a crossover is yet another step towards that goal. We cannot say for certain when the car will be released, but we do know that it will make a showing at the 2012 North American International Auto Show.

The final electric vehicle that we thought needed a mention is the 2012 Tesla Model S. Unlike the e-tron that we mentioned above this model is not a concept. The company has already run a number of tests of this car, and early reviews seem to be very promising. This is what the Nissan Leaf hopes that it could be, not only does it have the performance, it also has the range to match. However, it will also have the price tag as well when it gets released to the public in second part of 2012.

These are just three EVs that we can look forward to next year, but how will they prove in this upcoming market?