The 2012 Audi A6 is one of those cars that looks new but reminds you of another model, and that would be the A8, as it there are a few similar design elements. The new sedan is expected to launch early in 2011, and it would not be an Audi if it did not offer a high-tech space-age aluminum frame and a sexy looking interior.

Jeff Glucker from Autoblog has been looking at the specs and features of the 2012 Audi A6, even the new hybrid version. He starts with the cockpit design, saying that it almost becomes one with the driver, as it seems to surround the driver. 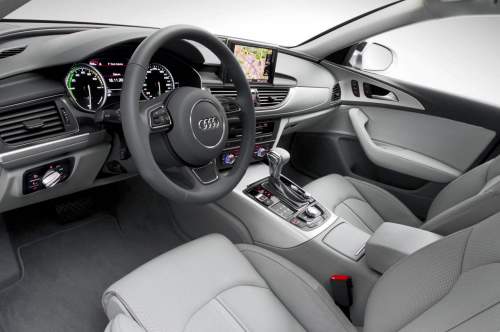 As well as the hybrid model (which we will get to in a moment) there is a selection of other powertrains to choose from. There are two gasoline and three diesel engines, all engines have an increased fuel-efficiency of 19 percent. Glucker reports that the most economical of the range is the 2.0-liter TDI, with an estimated 48mpg.

As for the A6 hybrid, the new 2012 model will come along after the sedan version. A 2.0 TFSI engine and an electric motor will power the new model; these are mated to an eight-speed transmission. You can select just the electric motor to run, the gasoline engine will still kick in once you hit 62mph plus. This new model certainly shows that it is not just Mercedes that can produce luxury cars from Germany.

Visit Autoblog now who has a full press release from Audi.