We first heard news about the Toyota Entune Multimedia System just over a week ago, when the Japanese automaker unveiled it at this year’s Consumer Electronics Show. However, Toyota Motor Corp introduced it again during the North American International Auto Show.

As Naoshige Shimizu over at techon.nikkeibp.co.jp recently reported, the Entune system — which features Apple iPhone and Android integration that allows you to use smartphone apps — will first appear in the upcoming Toyota Prius V, which is due to be released this summer in North America. 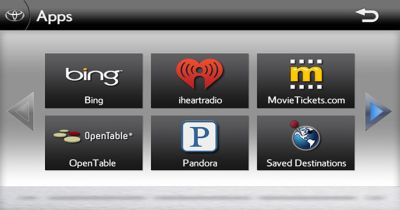 With the new Entune system, apps that have been developed for smartphones such as the Apple iPhone, for many things such as reserving restaurants, booking movie tickets and playing Internet radio, can be operated via the touch-sensitive screen featured on the car’s navigation system.

According to Chris Shunk over on the autoblog.com website, the 2012 Toyota Prius V is an inch wider and five inches longer than the O.G. Prius. It comes with 38 inches of rear leg room, 34.4 cubic feet of boot space, and is said to do 42 miles per gallon in the city and 38 mpg on the highway.