In an earlier article today, we took a look at what major differences there was between the Sony VAIO Z compared to that of the 2011 MacBook Air and found that on the whole, the Sony VAIO Z was much more impressive. We will now skim through the entire review found via Engadget, and touch on the most important factors for you to decide yourself.

As we stated in our benchmarking round-up, the VAIO’s graphics performance (with the Power Media Dock included) was a huge factor in making this an impressive machine, although it did tend to get hot, and started the fans off with a rather loud noise that could frustrate you.

Engadget listed more pros and cons in their 8/10 review of the Vaio Z, and say that it is “impossibly lightweight.” This is mainly down to the fact that they have moved less-important ‘on-the-go’ components such as the optical drive out, meaning that it weighs just 2.57 pounds (1.2kg), and is just six tenths of an inch (15.24mm) thin.

But that’s not the only impressive feat that the Vaio Z has going for it. The display is said to be gorgeous. With white whites, black blacks and equally impressive viewing can be had at all angles meaning that using the thing on planes, or commuter rails will be a synch. Saying that, they do mention that there is an odd reddish-tint if looking from the sides, but this is forgotten while looking head on.

Performance on the VAIO, as always, is superb. In between downloading numerous games, using Google Chrome, writing emails, using Google Chat and watching videos on YouTube and Hulu, the Vaio flew with flying colors. It even boots into Windows 7 in around 25 seconds. Now that is impressive! 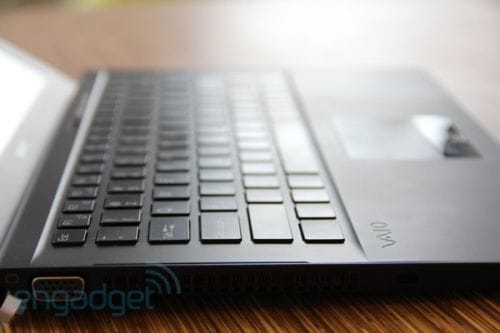 You can check the whole review over on Engadget, where they strip the machine down to its bare naked legs and redress it again, letting you know exactly what it has going for it, and what it doesn’t. But on the whole, we’re sure you will be amazed by the VAIO Z. If you are not though, we would like to know.