Earlier this year Apple released the 2011 MacBook Pro, this was the first product on the market to feature Thunderbolt connectivity, now we are hearing that upcoming Sony VAIO models will also get Thunderbolt, however the port looks slightly different.

We first suggested that a new VAIO series would feature Thunderbolt back in March, at the time details were scarce, however recently a photo showed up on Engadget which showed us our first glimpse of the port.

The image we have seen has been embedded below, as you can see that the arrow points to a port which we have not seen before, Engadget believe that this is Sony’s Thunderbolt port, although it does look like a USB port with a blue stripe running through the middle. This could mean a few things, maybe it is just a USB 3.0 port, maybe it is Sony’s Thunderbolt port, or maybe Sony has developed a port which allows you to use both Thunderbolt devices and USB 3.0 devices via a single port. 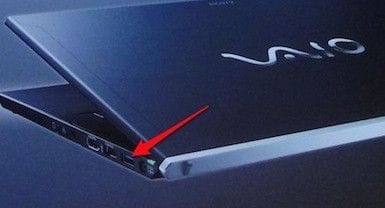 We are not sure what to believe, if you check out the comments section on Engadget you will see that there has been a huge response, the main argument seems to be if this is a Thunderbolt port why did Sony not use the same Mini DisplayPort as Apple, surely this is going to make finding universal products which work with both ports a pain.

Do you think the new port in the photo is Thunderbolt?