The first press day of the 2011 Chicago Auto Show is over and the second is about to start, and most automotive blogs have had obsessive coverage of the event. However, there is a still load more to come before the public gets to see some new cars and technology when the doors open to them tomorrow.

Whenever the first day of any auto event is out of the way, it is hard to decide which vehicle got the most positive reaction, which is why we have been looking around to see what some of the top auto blogs liked most. The first is from Autoblog, who we believe to be one of the best out there.

One off the first vehicles to get a mention was the 2012 Acura TL, which we already discussed. One point that we had to make was how strange the front looks. Other cars that Autoblog paid attention to were the 2012 Chevy Camaro ZL1, 2012 Dodge Charger SRT8 and the sexy looking Challenger Green with Envy; you can also read more on this when we previewed a few cars that will be shown at the event over the coming days. 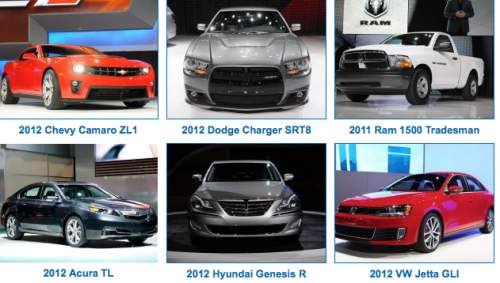 UPI does not go into detail too much with the vehicles at the Chicago Auto Show, but what they do is show some of what we believe are the best photos. If you visit their website you will be met with a series of images, the first of which is the charging station for the Nissan Leaf, the second is the same but for the Chevy Volt instead.

The final website that offers detailed coverage is AutoWeek; not certain if they offer as much detail as Autoblog, but that is for you to decide.

What will you have your eye on when you visit the Chicago Auto Show tomorrow?