If you were blown away by the Nokia N8‘s 12 megapixel camera you may be astonished to hear that 16.4 megapixel sensors could be coming to smartphones in 2011 thanks to Sony’s hard work.

Both modules are the smallest in their classes (you can see just how small in the image embedded at the end of this post), they are both back-illuminated, which should mean increased sensitivity and less noise in photos.

Apparently these CMOS camera modules will begin shipping in 2011, so don’t be too surprised if they arrive in high-end smartphones in Q3/Q4 2011. 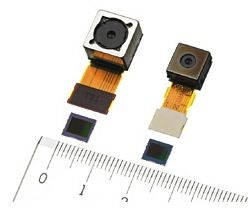