So far details regarding Modern Warfare 3’s multiplayer game modes have been scarce, a recent post over at SFX-360 suggests that someone recently broke into the Call of Duty XP event in Los Angeles and posted a 25 second video of his findings on YouTube – unsurprising the video has been taken down due to a copyright claim by Activision Games Inc, but the details which the video revealed are doing their round on the world wide web.

Let’s start by telling you about the maps which have been spotted, these are: Carbon, Coast, Dome, Exchange, Hardhat, Interchange, Lambeth, Meteora, Mogadishu, Paris, Plaza, Radar and Seatown. As you can see there are 13 in total, which is less than the last two Call of Duty games, perhaps there will be more upon the game’s release or the maps will be larger and more dynamic than we have ever seen before – we certainly hope so.

What we find more interesting is the fact that the screen below shows that some game modes will allow for up to 32 players, this is much higher than we have ever seen from any Call of Duty game before and we can confirm that the screens were taken from the Xbox 360 version of the game – so this is not something which is exclusive to the PC release. 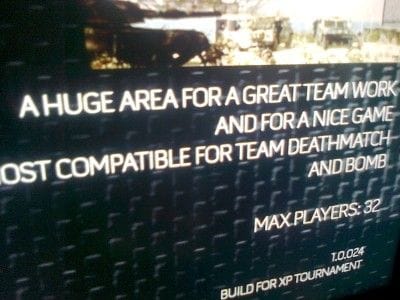 Sadly we do not have a full list of game modes available in Modern Warfare 3 – however we were promised new game modes by FourZeroTwo roughly two weeks ago, in the leaked video we are told that both Team Deathmatch and Bomb modes were available to play – the latter is something we have not seen before, but it sounds quite similar to Search and Destroy.

With the Call of Duty XP event kicking off in three days time we are sure that more jucy details will arrive in the latter part of the week – we will keep you posted as we hear more.