The AT&T roadmap for Q3 and Q4 of 2011 has now been leaked, and from what we can see there are 10 upcoming handsets, one of them is the Galaxy S II Attain. However, as we expected the iPhone 5 is no show. All the usual suspects are there, such as Samsung, HTC, Motorola and RIM. Looking at the roadmap that we have put in for you below you will see that there is a phone to suit all tastes.

Android will have the largest presence towards the end of the year for AT&T, but that will only be once Apple get their act together and release the next-generation iPhone. Samsung have three handsets to keep their customers busy, the Attain, i927 and the i937. The two former handsets will run on Android and the latter on Windows Phone 7.

As for Motorola they will have the MB865 Fuath on Android, while HTC will be offering up the Bunyip also on Android. There are two Pantech phones the Nuli and the Onza followed by one from Huawei, the Jengu. The final two handsets are from RIM, these are the BlackBerry Danava and the Maero, which are the new Torch 9860 and by the looks of it a second version as well. 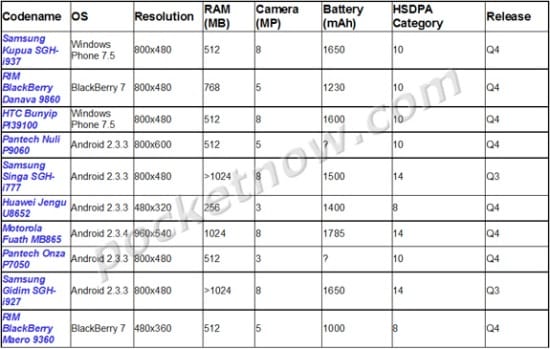 Pocketnow has noticed that there is no mention of the LG Thrill 4G, so we have to wonder how much faith we can put in this roadmap?
What we do like from this roadmap is how it offers other details on these handsets, such as screen resolution, RAM, camera, battery and what HSDPA category they fall under.

We do wonder why AT&T is not releasing more Windows Phone handsets, as they were meant to be putting all their effort behind the platform? From what we can see the effort is half-hearted, as you can see that the carrier is releasing more Android devices than anything in the final part of 2011.